50 years of Guiding for Helena 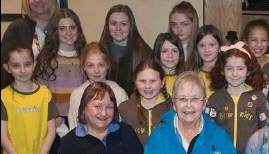 OVER half a century devoted to guiding was recognised at a special event in Comber recently. Comber woman Helena White thought she was going to an event at McBride’s on the Square to celebrate World Thinking Day – marked by Guides and Girl Scouts throughout the world to think about and celebrate their sisters around the globe. However, it turned out to be an occasion to acknowledge her own contribution to the guiding movement. Mrs White started her guiding career in 1958 when she joined the 56th Belfast Brownies and Guides and remained a member there until 1969. When she moved to Comber in 1970 she became involved with the unit in the town and is presently a leader with both Comber Brownies and Movilla Guides in Newtownards. Over the years Mrs White has held various leadership positions in the movement including district commissioner for Comber and division commissioner for Craigantlet which takes in the areas of Comber, Holywood and Dundonald. In 2002 she finished her stint as county commissioner for North Down and has been involved with Movilla Guides since then. Following her retirement from the civil service nine years ago she has helped out with Comber Brownies. Presently she is county president and will stand down from that position this summer. For the past seven years she has acted as ‘Mrs Claus’ at the annual Christmas celebrations on the Lorne estate Craigavad – the headquarters of Girlguiding Ulster. Looking back on her time involved with the guides, Mrs White says the best thing about it is the friends she has made along the way. “I have made the best friends over the years – it is just a lovely friendly and fun organisation,” Mrs White said. She has also enjoyed the outdoor life afforded by camping expeditions which she has led and which she says ‘the children love’. “The most exciting thing in my guiding career was the opportunity to go to Kenya with the Irish Girl Guides to work with the Kenyan Girl Guides on a service project for a children’s home,” Mrs White related. Describing the event at McBrides on the Square as ‘just lovely’ she revealed ‘I had no inkling’. “I thought I was going with the Brownies to celebrate World Thinking Day which is held on the February 22 each year – the joint birthday of Lord and Lady Baden Powell founders of the Scouts and Girl Guides,” Mrs White said. “It was absolutely fabulous – we had a lovely tea together.”