BALLYWALTER fishermen have called for the speedy repair of the village pier which was severely damaged during Storm Barra in December. 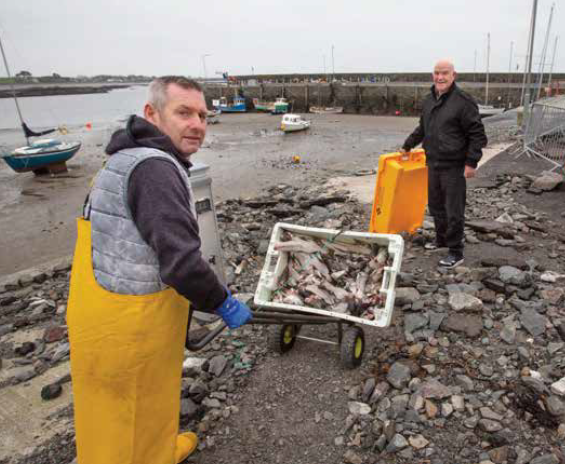 BALLYWALTER fishermen have called for the speedy repair of the village pier which was severely damaged during Storm Barra in December.

A large chunk of the pier collapsed into the tide when the storm battered the coast at the beginning of December and since then boat owners have been forced to carry bait and diesel down to their vessels, and carry their catch up to their vehicles in the village.

Lobster and crab fisher, Leslie Coffey, moors his boat in Ballywalter harbour. He catches over a tonne of buckie whelks every week and has to push them up the pier by buggy. “When you finish your day’s work you don’t expect to have to push your catch up the harbour,” Mr Coffey said. “We need some sort of access for vans and trailers so that we can keep our businesses running.” Strangford MLA Michelle McIlveen and peninsula councillor Robert Adair met with fishermen at Ballywalter harbour last weekend when they were apprised of the need for urgent reinstatement works to begin as soon as possible.

Miss McIlveen underlined the importance of putting in place a temporary access at the earliest opportunity to allow those making a living from lobster and crab fishing to continue with their work. “It is appreciated that full repairs to the harbour are going to take some time but there is a need for more immediate action to facilitate local fishermen and port users,” she said. “From speaking to the fishermen, there is a lack of space at Donaghadee harbour and there is no other suitable point along the coast which can serve this purpose.” Mr Adair raised the issue at last night’s meeting of the full council when he asked that council officers prepare a report assessing the recent coastal and storm damage, detailing the repair costs with a view to reinstating the harbour as soon as possible. “There are concerns in the village about the state of the harbour and the need for temporary access for fishermen and port users to carry out their daily business,” Mr Adair said. “The desire of the fishermen and residents is to have work on the harbour completed this summer for the benefit of locals and tourists alike.”

A council spokesman said following the significant damage to Ballywalter pier in Storm Barra it was closed off in the interests of public safety. “However, safe pedestrian access was maintained for the fishermen and this remains to be the case,” he said. “Vehicular access will not be possible until the repairs have been completed.” He said the repair project is currently at design stage and would be completed as soon as practically possible. “Council officers will continue to assist the fishermen in any way possible and would ask them to contact the Harbour Master to discuss any potential additional measures if required,” he said