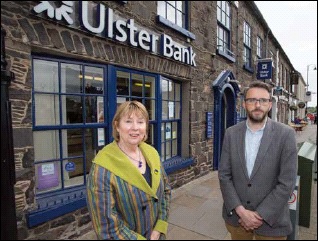 ALLIANCE politicians have met senior management of the Ulster Bank to discuss the planned closure of the branch in Comber. Also in attendance were members of Comber Chamber of Commerce, including chairwoman Iris McBride, vice-chair Tracey Burrows and treasurer Peter Bond.

Strangford MLAs Nick Mathison and Kellie Armstrong were accompanied by Ards and North Down alderman Deborah Girvan to hear directly from Ulster Bank concerning their proposed closure. Mr Mathison said the group communicated a very clear message that the residents and businesses in Comber value and rely upon their banking service and strongly supported the retention of the branch. “Banks are, of course, businesses that need to make a profit, but they also provide a vital service to the public,” he said. “It is incredibly disappointing there appears to be no possibility of a review of this decision to keep the Ulster Bank open in Comber.

I will be writing to the Bank to express these concerns and urging them to reconsider.” After listening to the reasons why the bank should remain open, Terry Robb, Head of Personal Banking explained that internet banking had changed how banks were conducting business and it was no longer financially viable to keep some of their branches open as the majority of customers were now banking online.

Mrs Girvan, the former Chairwoman of the Chamber of Commerce explained to Mr Robb that Comber had a large elderly population, many of whom didn’t have access to a computer let alone a Smartphone. “Furthermore, Comber is expanding exponentially with over 1,500 houses planned within the next 10 years which will bring more people to live in the town who will need a local banking service,” she said. “However, despite our very valid reasons to stay open including bringing footfall to the town, providing a facility for businesses and residents to deposit and withdraw money, plus the inconvenience and time taken to travel to Newtownards to conduct banking business, it was made clear that the decision had been taken and regrettably the bank is set to close in October. “The Ulster Bank was the last remaining bank in Comber.

It just doesn’t affect the businesses and residents of our town but the surrounding districts of Dundonald, Ballygowan, Lisbane, Killinchy and Killyleagh. Shame on the banks for putting profit before people.”