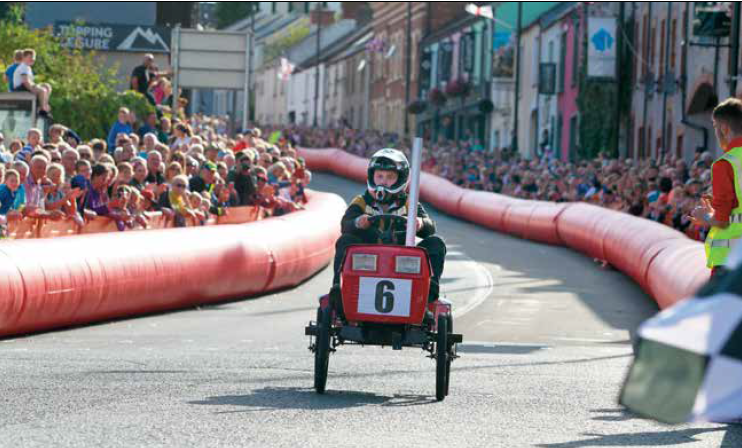 COMBER could lose its popular soapbox race for good after getting a red light from the council on insurance coverage. That’s the fear of several local politicians, concerned that the cost of premiums – suggested to be up to £1,000 for the single-day event – would be far too high for the small committee that organises the race to bear by itself. First staged in August 2019, the event was an immediate hit and locals have frequently hoped the TT dash though the centre of town would make a comeback.

But this week Ards and North Down Council put the brakes on the idea, stating that its insurers have judged soapbox racing to be a high-risk activity that the local authority’s policy can’t cover. Instead council officials say that the burden of sorting out costly and complicated premiums has to be shouldered by the volunteer organisers of the race, which politicians fear will kill off the event for good. Comber councillors had asked officials to check into any ways of helping race organisers set up insurance for the event, possibly by including the TT in the council’s own public indemnity policy.

Officials have now stated that the council’s insurers won’t allow the local authority to expand its policy to cover the race, and add that the organisers should instead approach private sector brokers to buy their own insurance. During a meeting of the council’s Corporate Services Committee on Tuesday night, that position infuriated deputy mayor Craig Blaney.

He pointed out that the council’s events strategy was to ‘look after big events [in-house] but let smaller events be community-led, and try to support them as much as possible’. Asked Mr Blaney: “Have we done everything we can to support this event and help get insurance? “These events do happen, they happen all across the United Kingdom.

The one in Comber is absolutely fantastic, I would hate to see it not go forward because the council couldn’t support it.” Council chief executive Stephen Reid replied that the council ‘has tried everything that [it] can do’, but stated that officials may be able to pass details of a company that insured a soapbox race elsewhere in Northern Ireland onto the Comber TT committee. Said Mr Reid: “The fact is that we can’t indemnify this type of event; unfortunately it’s deemed to be high risk, that’s the problem. “Even if we were running this event ourselves, we’d have the same problem. It’s just due to the level of risk. We’ll help the group as much as we can, but there’s no ability for us to insure it.” Alderman Deborah Girvan stated that ordering a voluntary group to sort out its own insurance for a town centre race would ‘take a big chunk of the running costs from a small committee’. “This is a very popular event, and getting insurance for this could possibly preclude it from going ahead,” she said. “Costs could be upwards of £800 to £1,000, it’s a lot of money.”

The insurance issues, suggested alderman Stephen McIlveen, likely arose from a crash at a soapbox race in England that left one person seriously injured. “This has made it incredibly difficult to get insurance for events like this; it’s being able to get someone who will cover insurance, rather than the cost of the premiums,” he said. The committee endorsed officials’ position that the Comber Soapbox TT can’t be insured by the council. That decision still has to be rubber-stamped by a full local authority meeting at the end of this month, but it’s unlikely to be overturned at this stage.