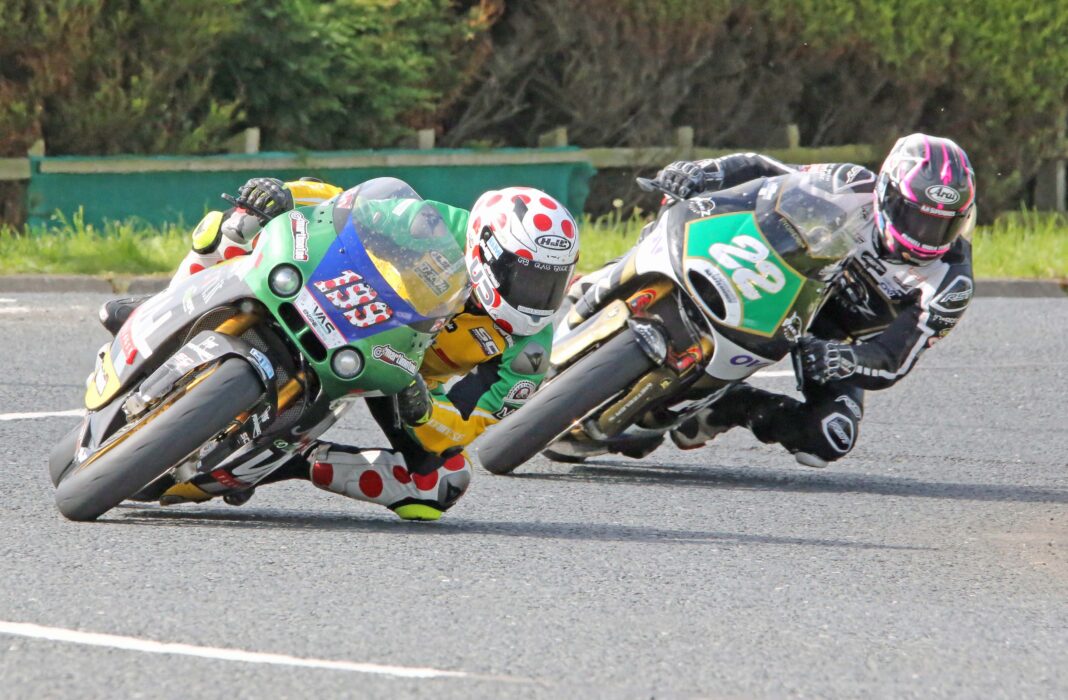 Drama and controversary at the North West 200

The 2022 Fonacab-Nicholl Oils North West 200 made a welcome return to the streets of Coleraine, Portstewart and Portrush last week, following a two-year absence.

Ballygowan man Alan Johnston was the among the competitors, but Carrickfergus racers Alastair Seeley and Glenn Irwin stole the headlines.

Racing began on Thursday evening in cold and wet conditions. Only two of the three scheduled races were completed in very trying conditions, with the Supertwins postponed until Saturday.

Saturday’s conditions were the total opposite with some of the warmest temperatures seen at the North West for years. A massive crowd was treated to a well-run meeting with great racing. The only downside of the meeting was the disqualification of double Supertwins winner, English visitor, Richard Cooper for a technical infringement. There was also drama just before the Superbikes race, when the Dunlop tyre technicians made an announcement that a faulty batch of tyres had been received and they recommended riders with their tyres not to race.

A reduced field took to the grid on Thursday evening for the opening race for 600cc machines in wet and cold conditions. Carrickfergus man Alastair Seeley took the IFS Yamaha to the front from the start chased by Davy Todd, Jeremy McWilliams, Adam McLean, James Hillier and French man Pierre-Yves Bion.

By the penultimate lap Seeley was leading by over a second with some masterful wet weather riding, but Todd, McWilliams and McLean were in a fight for second, followed further back by Conor Cummings and Dean Harrison. On the final lap of the race Seeley put in the fastest lap at 108.238mph to win by over two seconds from Todd who pulled clear of McWilliams and McLean, with Cummings fifth and Harrison in sixth.

The Tides Restaurant Supersport race two on Saturday saw a great scrap between Todd and Lee Johnston, the opening two laps saw Todd lead Johnston by a very small margin. By the end of lap three, Johnston hit the front, but Todd was back in the lead at the end of the penultimate lap. On the final lap Johnston just got to the line and pipped Todd to win by only 0.079 of a second. Todd had the consolation of a new lap record with a speed of 118.036 on lap five. Behind the top two Michael Dunlop finished a steady third followed by Harrison. Joe Loughlin was just beaten into fifth by James Coward on the final lap.

The Anchor Bar Superbike race one on Saturday provided a victory for another Carrickfergus man Glenn Irwin on the Honda Racing UK machine, who led all the way. But he was pressed hard by Todd who only lost out in the end by 0.253 of a second after six flying laps. Cooper came home a lonely third. Harrison held fourth till lap five before he retired, moving Australian Josh Brookes up to fourth. Seeley worked his way up the field on his Superstock machine to finish fifth just holding off Cummings. Peter Hickman lost ground early in this race and broke the lap record with a speed of 124.799mph only to retire on lap four.

The main race of the meeting was the Merrow Hotel and Spa North West 200 Superbike race. The grid was missing a lot of top names, including Hickman, Todd, Dunlop and Rutter, due to the Dunlop tyre problems.

This race was an easy win for Irwin who was followed home by Cooper. Brookes claimed third, Ian Hutchinson moved up to fourth after lap six as fifth placed finisher Hillier was demoted and docked ten seconds for course cutting at Juniper. John McGuiness filled sixth spot.

Arguably the story of the weekend was the performance of Alastair Seeley.

On Thursday evening he won the Turkington’s Superstock race. From the start Seeley took the lead from Todd opening a gap at the front of the field. Cooper mounted a challenge in the wet conditions for second but made a mistake and dropped back to a steady third. Cummings held a race long fourth, followed home by Michael Rutter with Banbridge privateer Marty Lennon in a fantastic sixth after starting in the B group.

The CP Hire second Superstock race provided Seeley with yet another victory. In this race, he led for two laps chased by Dunlop, but Dunlop overshot and dropped back to third only to retire on lap four. This moved Johnston up to second when he passed Todd followed by Harrison, on the final lap Todd was in trouble and retired from the race, leaving Seeley to win from Johnston and Harrison with Michael Sweeney up to fourth just ahead of McGuiness and Sam West in sixth.

The Milltown Service Station-JM Patterson Supertwins race that was cancelled on Thursday, saw English visitor Richard Cooper take the lead and steadily pull away from Johnston in second and France’s Pierre Yves Bian in third, on Saturday. Paul Jordan and Bian took turns in second until the final lap when Bian smashed the lap record at 111.281mph to finish second from Jordan, with Johnston recovering to fourth McWilliams in fifth and Coward in sixth. But with the original winner excluded from the results, France had their first North West 200 winner in Pierre Yves Bian on a Paton, with Sweeney up to sixth.

In the other JM Paterson Supertwins race, Cooper led all the way but due to being excluded Casleblaney’s Joe Loughlin inherited the win on a ILR-Coverdale Paton. Johnston moved past McWilliams at the end of lap three into second. Coward was close to third but claimed fourth Sweeney was fifth and Welshman Michael Rees in sixth.

The motorcycle racing now moves on to the Isle of Man TT from 29 May to 10 June. For Northern Ireland enthusiasts a round of the Ulster Superbike Championship will be run at Kirkistown on 4 June by the Belfast and District Club.