Fears for the family of Portaferry hotelier 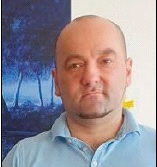 A PORTAFERRY man who has family living in Ukraine has said the events unfolding following the Russian invasion have been ‘surreal’. Polish national Krzysztof Piorek, who has lived in Portaferry for the last 17 years, is one of the many people living in Northern Ireland with connections to Ukraine. The hotelier, who runs The Narrows Guesthouse, said he was ‘shocked’ to discover Russia had begun a large-scale military attack on Ukraine last week, following orders of Russian President Vladimir Putin. With cousins living a short distance from Lviv, in western Ukraine, Mr Piorek, whose father was born in Ukraine, said he felt worried for his family and friends living in the country. When asked how he felt as he watched the events unfold last Thursday, Mr Piorek replied: “For me it felt surreal that in the middle of Europe you have a war going on and it’s not a hybrid war, it’s an open war. It is very upsetting.” Mr Piorek is allowing his guesthouse to be used currently as a collection point in Portaferry for donations for Ukrainian refugees in Poland. He stated that he always tried to help when he could for causes, noting that his time in Portaferry had been welcoming and that he wanted to ‘give back’. Mr Piorek also has family living in Poland, close to the Ukraine border and noted how the country had so far welcomed over 280,000 refugees in less than a week. “How it [the war] will go on I have no idea. It is all moving at a very fast pace at the moment at the border – so what will happen there I have no idea,” he said. Mr Piorek continued: “I am not only worried for my family but for other people. I know a lot of Ukrainians who live over here in Northern Ireland and the Republic – everybody is worried. “We didn’t think this would go on – we thought that Putin was bluffing but evidently he wasn’t but Ukraine is still defending themselves. “For me this is still all very surreal. If it wasn’t for the pictures and videos and all that you can read and see in the media I wouldn’t think that this was something that was happening. “But unfortunately it is happening and it’s shocking. I believe that the whole western world is having a very good reaction and they are supporting Ukraine.”