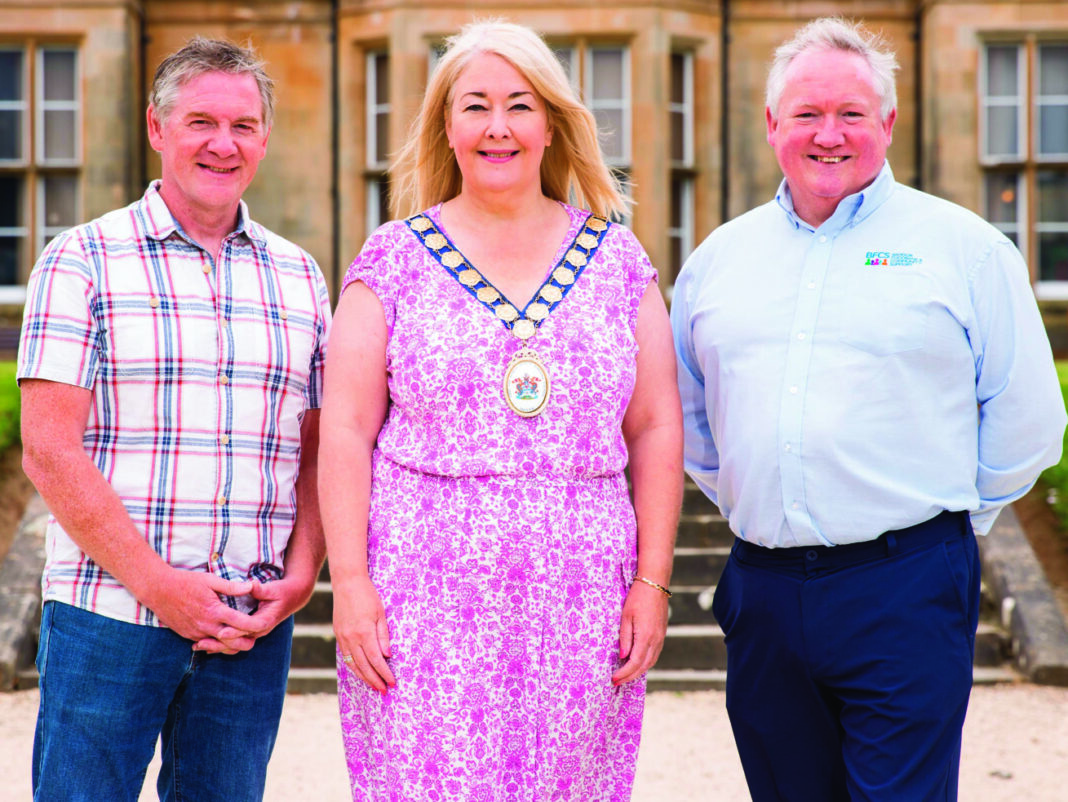 DEMAND for Newtownards Foodbank has increased dramatically over the past year as the cost of living crisis continues to bite.

Over the first six months of 2022 the local foodbank fed 1,205 people, which is an increase of 47% on the same period the previous year. In June alone, the charity helped 239 people – a huge 136% increase compared to June 2021. The shocking figures were revealed by the foodbank manager, Richard Porter, during a special event in Bangor Castle at which the new Mayor, Karen Douglas, unveiled the charities she would be supporting during her time in office.

Mayor Douglas will be backing Newtownards and Bangor Foodbanks as well as North Down and Ards Women’s Aid. The Newtownards Foodbank opened in 2011 and was the first Trussell Trust Foodbank in Northern Ireland, serving Newtownards and the surrounding area by supplying emergency food parcels and support to local people.

Mr Porter said the foodbank is so thankful for the opportunity to be part of the Mayor’s charities group. “It is such a great opportunity to highlight what we do but, more importantly, the incredible need that is in our community,” he said. “The desire is that nobody should face food poverty in our community but, when that happens, there is somewhere where they can get help. “Our staff is there to support people at a time of crisis with the food they need and can also signpost people to other avenues of help too.

Any one of us could face food poverty and our services are available to support you when life gets tough.” The manager said the foodbank has received donations of 13.5 tonnes of food during the first six months of this year but has given out 16.3 tonnes in the same period.” As she unveiled the charities she would be supporting, Mayor Douglas said ‘nobody in the borough should suffer in silence’. Describing their work as ‘invaluable’, the Alliance Party politician urged members of the public to get involved with the range of charity events being held in the coming months. She explained her choice of charities saying the cost of living crisis had left many local people and families ‘struggling to make ends meet’. She said: “Financial pressure can put strain on relationships in the home too, leaving many people feeling isolated with nowhere to turn. It is so important that when people find themselves in times of crisis or distress the necessary resources and support are readily available. “I am immensely proud to be working alongside Foodbank use soars as Mayor’s charities announced my three chosen charities this year, Bangor Foodbank and Community Support, Newtownards Foodbank and Women’s Aid.

The work each of these charities is doing within the borough is invaluable. “I have a range of events organised in the coming months to help raise much-needed funds for them. I would really love for as many people as possible to get involved and to help make a positive difference to the lives of people living in Ards and North Down.”

Women’s Aid is the lead voluntary organisation in Northern Ireland addressing domestic abuse and providing services for women and children, with North Down and Ards Women’s Aid first established in 1982. Michelle Myatt, interim CEO, said North Down and Ards Women’s Aid would like to thank the Mayor for choosing them as one of her nominated charities for the coming year. “This support and awareness comes at a critical time as reported domestic and sexual abuse incidents continue to rise in the Ards and North Down area. From 1 April 2021 to 31 March 2022, a total of 2,253 incidents were reported, an increase of 11.1% from the previous year. “Reported crimes also increased by 27% based on the previous year with 1,395 reported. These are the highest figures recorded since records began in 2004.” Bangor Foodbank and Community Support was launched in 2012 and is a member of the Trussell Trust network of foodbanks. It provides muchneeded support for at-risk families, the elderly, and individuals in North Down.

Ken Scott, project manager, said: “Over the past year, Bangor Foodbank and Community Support has adapted rapidly to frequently changing risks and restrictions due to COVID 19, as well as increasing levels of need due to the increase of living costs. “We have seen a dramatic increase in the number of people requiring our support during the past 12 months. Between 1st July 2021 and 30th June 2022, BFCS has distributed 59,831KG of food to people locally, this equates to 142,454 meals (2,740 meals a week). To make a donation to the charities, contact the Mayor’s office on 0300 013 3333 or email mayors.office@ardsandnorthdown.gov.uk.