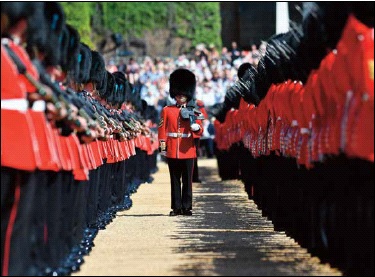 ARDS and North Down Borough Council will award its highest honour – the Freedom of the Borough – to the Irish Guards at a formal conferment ceremony this week. In recognition of receiving the award, the regiment will hold a parade and drumhead service at Conway Square, Newtownards, on Saturday, June 25. The event will be attended by Brigadier Alex Turner DSO, members of the Council and officiated by the Mayor of Ards and North Down, Karen Douglas. It is only the second time the Freedom of the Borough has been awarded since Ards and North Down Borough Council was established in 2015, and only the 35th occasion since the first conferral in the area, 92 years ago in 1930. Mayor Karen Douglas, said: “I am delighted the Irish Guards will be awarded the Freedom of the Borough. The award is being made in appreciation of the exceptional contribution and courage of the regiment. It is the highest honour a council can bestow on an individual or an organisation. It is an ancient privilege, dating back to the 1600s, and is now an honorary title reserved for those the council deems to have given eminent service. “The Irish Guards have a long and honourable association with our borough. The regiment recruits from across the island of Ireland and many hundreds from Ards and North Down have been proud to serve over the years. By bestowing this honour, we are publicly recording our thanks and recognising the outstanding work the regiment delivers.” The Irish Guards’ Major General Christopher Ghika CBE, who will attend the formal conferment ceremony, said: “We are proud that we are being awarded this honour in recognition of our close ties with Ards and North Down. As a regiment, we are immensely proud of our relationship with the borough. Testament to this are the many men who have served with the Irish Guards throughout the decades and there are many currently serving within our ranks from the borough of Ards and North Down. “It is not wasted on all Irish Guards personnel that it is a great honour to march through the borough with which we have such strong ties, with drums beating, bayonets fixed and colours flying. As we cement this special relationship with Ards and North Down, we look forward to receiving and welcoming many more recruits into our ranks, for a career of travel, adventure and service.” The parade will be led by the Irish Guards’ Mascot, Turlough Mór, who is known as Seamus to his colleagues. It will consist of the Regimental Band of the Irish Guards as well as the Drums and Pipes of the 1st Battalion Irish Guards, with approximately 130 personnel in total, including 76 band members. They will march from Castle Street to Conway Square at 11am on Saturday. A drumhead service will take place in Conway Square before the Irish Guards’ return parade to Castle Street. Parade Route – 11am: Castle Street – High Street – Conway Square. Parade Route – after Drumhead Service: Conway Square – High Street – Mill Street – Gibson’s Lane – Regent Street – Frances Street – Castle Place – High Street – South Street – Court Street – Old Cross Street – Castle Street. For more information, visit ardsandnorthdown.gov.uk/irish guards.