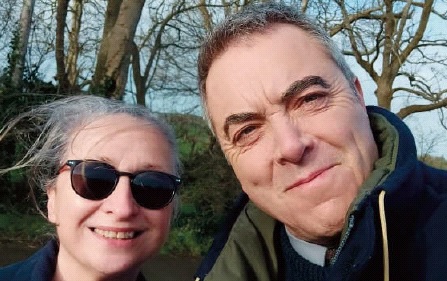 ACTOR James Nesbitt took time to thank carers in the community when out filming on Monday in the Ards peninsula.

The Northern Irish actor, who was out filming for the latest season of Bloodlands, took time to praise the work of community carers after spotting the uniform of Portavogie woman Carole Neal.

Carole, who has worked as a community carer for 15 years, explained that she had been working near the undisclosed area on Monday morning, when she was approached by the well-loved

actor.Taking time out of filming, James thanked Carole for her work as a community carer and also gave thanks to all those working in similar roles for their hard work.Carole recalled: “He came over to me and we got talking. Of course I had my care in the community uniform on and he thanked me very much for all we [all carers] have done.”Carole joked that she was a ‘bag of nerves’ when James came to speak with her.“I said thanks to him for coming over to talk to me and he thanked me and all the carers for the work we have done in the community during Covid and all the rest of it,” she said.Hoping to capture the moment, Carole said she attempted to take a selfie with the star but struggled to get the buttons working and so James took one for her.Originally from Birmingham, 63 year-old Carole moved to Portavogie 18 years ago and began her career as a community care worker three years later.Speaking about her love and passion for her job, Carole said: “We meet all needs for anybody who lives at home and requires a helping hand.”

She said community care workers often worked varied days, explaining that they would do anything from preparing food to providing personal care and palliative care.

When asked how she was inspired to take on her caring role, Carole said her mother had moved to Northern Ireland along with her.She explained that her mother had ailments and difficulty with her leg.

“Instead of the nurse coming out I started to look after my mum’s legs and things like that and doing care and I thought ‘I should have been a nurse’,” Carole said.

“But because you have to have a degree and all the rest of it I thought there was no chance with my age.“So I started care in the community and I think it is an excellent service.”

Carole stated that the underlying requirement for all community care workers was ‘caring’. “You have to care or else you shouldn’t be doing the job,” she said.

“It is a very personal situation and they have to have trust in you. It’s making a friend with somebody and having them trust you to come into their life and into their house – it’s a very big step.”

She concluded: “I love my job so much. You could not do this job properly unless you really have a passion for it.”