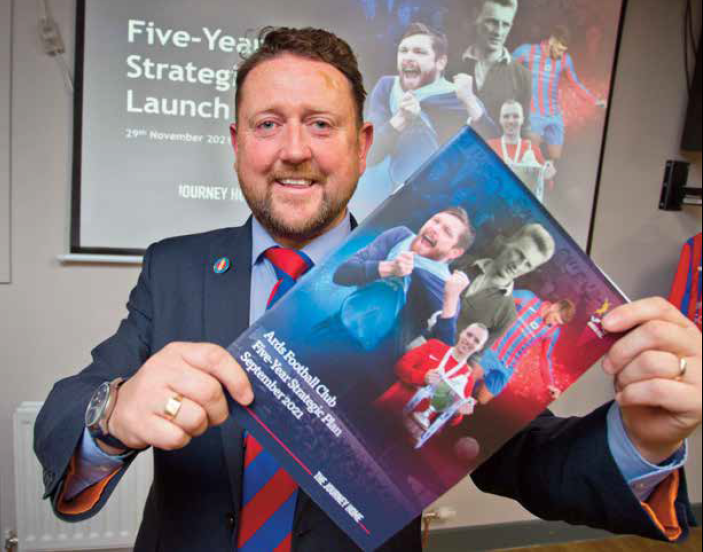 ARDS Football Club has unveiled plans for a new stadium on the Portaferry Road. It’s hoped the new stadium will be situated on the council-owned Floodgates land, just a few hundred metres away from the club’s traditional Castlereagh Park home.

At a pre-planning information night, club chairman Warren Patton showcased drawings of the proposed new ground that included a 380-seater home stand, 260-seater away stand, changing rooms, office facilities, floodlights, a 3G pitch and a car park. The Newtownards club left Castlereagh Park in 2001, following a financial crisis that threatened to close the century-old institution. Since then, home fixtures have been played in Carrickfergus, Ballyclare and Bangor. Ards has resided at Clandeboye Park – home of Bangor Football Club – since 2012.

If this plan succeeds, it will end the twodecade search for a new stadium. Upon presenting the new plans at the Ards FC Sports Club on Thursday night, Patton said: “We’re very proud of these designs. We have been working on them with Hamilton Architects for the last 18 months. “They are first class architects who were involved in the reconstruction of both the National Stadium and the Kingspan Stadium. “We’ve been 21 years without a home, and I feel this is our best chance within those 21 years. But it’s not going to happen unless the community unites behind us. We need the help of our supporters and the wider community to finally make this dream a reality. “But we’re also here to listen. We will respect the views of others and take on board any suggestions.” The information night is part of a 12- week consultation process. Once the consultation process is complete a planning application will be submitted for the new ground.

If the 2,000 capacity facility receives planning approval it would take 18 months to construct. However, for the ground to become a reality the club most secure funding for the £4million project. Department for Communities has £36million ringfenced for improving football grounds in Northern Ireland. Ards hopes to secure some of that pot. However they face stiff competition from several larger Irish League clubs, including the likes of Glentoran and Ballymena United. The funding, that was first mooted in 2011 and approved in 2015, has been stymied by the current political impasse.

Patton explained: “What you’re looking at here is plan A. It’s priced at between £4millon and £4.2million. Plan A is our dream, and we believe this club and this town deserves that dream to come true. “But there’s also a plan B and plan C, should we not secure the amount we desire. Those plans are more modest, but we are determined to get the best possible value for the town. “NIFL is fighting the corner for our clubs, asking for the Executive to increase and release the £36million funding pot. Considering the money was first suggested in 2011, I think it would be only fair that the funding was increased in line with inflation. “Whether or not that will happen, I don’t know. It’s beyond our control. All we can do is put our plans in place and make our case.”

This is the most recent in a long list of proposals for a new ground. Previous attempts included a stadium that incorporated a dog racing track, a community stadium at Londonderry Park and a site within the ground of Movilla High School. It’s also not the first time the club has tried to secure a portion of the councilowned Floodgates land. In 2015, a similar plan came unstuck, in part, because of an issue with Japanese Knotweed.

Ards vice-chair Stephen Wilton explained that the new plot is safe for construction. “We have already spent thousands of pounds ensuring the land is suitable. Surveyors and environmental services have worked on the land over the course of the last year, and the land is clear. “This is on a different part of the Floodgates plan from the previous plan, and the reports suggest there are no issues with things like Japanese Knotweed.” Last Thursday’s meeting was attended by several Ards and North Down Borough councillors plus MLAs Harry Harvey and Mike Nesbitt. Nesbitt warned that the Sub-Regional Stadia Programme – that has ringfenced £36million for football – is unlikely to be released by the Department for Communities until work beings on Antrim GAA’s proposed 34,000 seater Casement Park refurbishment.

The current DfC minister is Sinn Fein’s Deirdre Hargey. He said: “According to NISRA, Newtownards is the seventh largest town in Northern Ireland, yet it is the only one without a senior football ground. That must be part of the club’s case for this funding. “But without wishing to put a dampener on things, I think it’s unlikely that a Sinn Fein minister will release the funding for football until Casement Park is sorted. I think that’s the reality. “If the Executive returns, it would be preferable if a minister from a unionist party was to take control of the Department for Communities and released football’s money, which is basically being held to ransom now. “I’m pressing for that money to be released as soon as possible, but Sinn Fein has the mandate.”