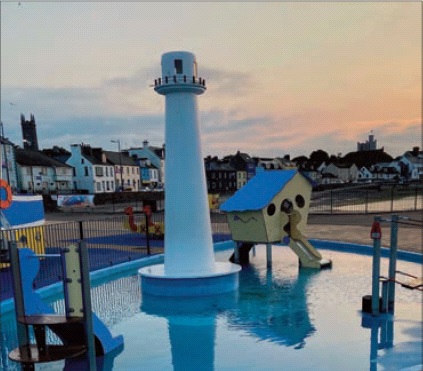 FAMILIES have been outraged to find two local paddling pools running dry during this week’s heatwave – despite almost £250,000 being ploughed into an upgrade. Both Donaghadee and Groomsport pools were out of action as temperatures soared, with Ards and North Down Council officials blaming drainage problems in both.

It’s the latest in a long line of closures and problems to strike the facility, as recent summers have seen the pools repeatedly shut down due to a variety of issues – but it was hoped the quarter of a million pound upgrade to Donaghadee’s paddling pool and its surrounding facilities would have sorted out any lingering snags.

According to officials, a faulty valve means Donaghadee’s pool can’t be filled while the Groomsport facility is losing water and ‘draining prematurely’, though it remains open for use. Seen on Tuesday evening, the Donaghadee facility had a pool of water that was less than an inch deep, substantially more shallow than it should have been – and there wasn’t enough water in it to touch the sides of the pool, leaving it with large dry patches. The situation was slammed by two local politicians, who stated that it’s simply embarrassing to be denying kids their summer splash during a school holiday heatwave due to yet another round of problems with the paddling pools.

Councillor Tom Smith said he’d raised the problems with Donaghadee’s pool with officials last week, and had hoped that it would be fixed by the start of this week – only to get angry phone calls from parents of disappointed children on Monday morning. “It is an utterly ridiculous situation to be in,” he said. “The park is just over a year old and was upgraded at the cost of over £230,000. “[Officials] are aware of all issues and have been asked to get this sorted as soon as possible. We will continue to push this and get regular updates on the status of the repairs.” Mr Smith also criticised the council for failing to publish any news of the problems on social media channels until Monday evening, many hours after complaints started rolling in and he went public with the issues. “They could at least try to inform the ratepayers of what’s happening,” he said. Councillor Mark Brooks reinforced that paddling pools had been out of action during the summer before the pandemic hit, at that time due to issues with the surfaces of the facilities. “I really am embarrassed that during a heatwave and the summer holidays, both paddling pools are closed in Donaghadee and Groomsport,” he added. Promising to get both facilities up and running properly again, council officials encouraged people to head to local beaches for a paddle in the meantime. “We are sorry for any disappointment caused to residents and visitors but hope that the little – and not so little – ones will enjoy a splash or two when the issues are resolved,” stated a council spokesman.