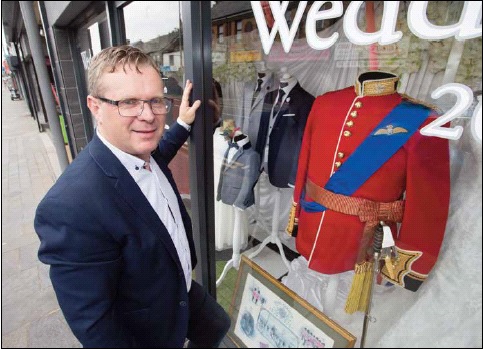 The specially made tunic, bearing the insignia of the Irish Guards, will be on view for royal fashion observers at local shop, Street Life, ahead of a planned parade and Drumhead Service by the Irish Guards on Saturday. The tunic was specially made for the Duke of Cambridge’s nuptials, which took place back in April 2011, however, the heaviness of the fabric and the threat of searing heat, prompted the royal to opt for a lighter version of the garment for his big day. Now referred to as ‘the second tunic’, the red jacket, featuring the Irish Guards’ distinctive arrangement of buttons in groups of four, is on loan for two weeks at the Newtownards store. Delighted to have the honour of displaying the royal fashion piece at his store, Derek Wright, gave thanks to Lieutenant Colonel Simon Nichols of the Irish Guards, for securing the valuable clothing piece.  Lt Col Nichols, who hails from the West Winds, is set to leave the regular army in October, after 38 years’ service and was presented with a personal gift by the Duke when he and the Duchess of Cambridge visited Belize earlier this year; Lt Col Nichols was stationed there as commander at the British Army Training Unit in Price Barracks. As a Sergeant Major, Lt Col Nichols trained both Princes William and Harry during their time at the Royal Military Academy, Sandhurst, from 2005 to 2007. Mr Wright, who is also the president of Newtownards Chamber of Trade, explained: “Lt Col Nichols worked at Street Life in 1983, when it very first opened. He was virtually our very first employee. “He then left and joined the Irish Guards and has done very well for himself and rose through the ranks.” The Irish Guards was awarded the Freedom of the Borough on Saturday, by Ards and North Down Borough Council, the highest honour a council can bestow, in recognition of their ‘exceptional service, dedication and courage’. Prince William presented the Irish Guards with new colours last month ahead of the Platinum Jubilee, which were revealed during the Trooping the Colour ceremony, which marked the Queen’s birthday. To mark the occasion, the council is set to host a Conferment Ceremony tomorrow (Friday), followed by a parade and service which is open to the public in Newtownards on Saturday. Mr Wright said he was delighted to be displaying the royal tunic with the regiment coming to town at the weekend, paired with the successes of Lt Col Nichols. “The tunic will be on display at the shop and there will be memorabilia on show throughout the town in a number of shops,” Mr Wright continued. “Newtownards has proud links with the military – with lots of different regiments and of course Blair Mayne, founding member of the Special Air Force.” There will be no market in the town on Saturday due to the parade taking place, however the shops will be open for business. “This will be a great family day out for all and it will be a real spectacle for the town,” Mr Wright added. The parade is due to begin on Saturday at 11am from Conway Square, with the route continuing to High Street, Mill Street, Gibson’s Lane, Regent Street, Frances Street, Castle Place, High Street, South Street, Court Street, Old Cross Street and Castle Street.