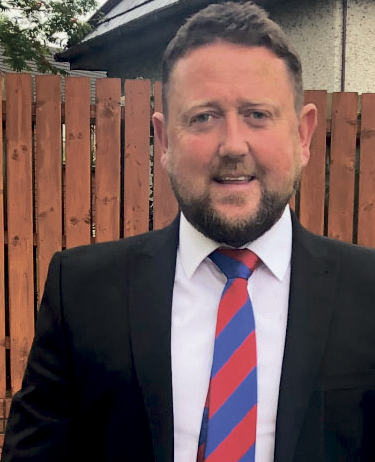 ARDS chairman Warren Patton has branded MinisterDeidre Hargey’s decision toshelve the Sub-RegionalStadia for Soccerprogramme as a ‘kick in the teeth.’ On Monday, the Department for Communities Minister informed the Assembly that the £36m set aside to improve football grounds in Northern Ireland could not be released without Executive agreement. Earlier this month, the Executive collapsed whenthe DUP’s Paul Givan resigned as First Minister following a dispute over the Northern Ireland Protocol. Sinn Fein’s Hargey said: “I had aimed this was to be done before the end of the mandate, but because some walked away, this cannot now be done.”The Executive first committed £36m to develop football grounds in 2011.  Following consultation, DCAL (nowDfC) outlined a funding plan in 2015. However, the vital funds remain unreleased. Ards Football Club hoped to use a portion of the Sub-Regional Stadia programme to build a new ground. The club, that left its traditional home of Castlereagh Park in 2001, is on the brink of signing a lease for the Ards and North Down Borough Council owned Floodgates land on thePortaferry Road. Club chairman Patton explained that Monday’s news is yet another set-back for exiled Irish League team, that plays home games at Bangor Football Club’s Clandeboye Park. He said: “I’m gutted. Our name was in the hat to receive some of this funding, so this is a real blow for us. “We’ve worked tirelessly behind the scenes to secure a plot of land and to create plans that will bring senior football back to Newtownards. To now hear that the Sub Regional Stadia Funding programme has been shelved is very disappointing. “I’ve expressed my disappointment to our MP Jim Shannon and he shared my concerns. I’ll talk to our MLAs in due course. This funding was first agreed in 2015, and here we are in 2022 and it’s no further down the line. “However, I’d like to reassure supporters that this decision will not dent our ambitions to bring Ards home. We’re working away in the background, and we will continue to do so.”The storied football club hopes to build a modest but modern facility that includes a 3g pitch, floodlights, a seated stand, terracing, changing facilities and a car park on the Floodgates land. Over 20 NIFL clubs share similar ambitions. Patton said: “Irish League football is enjoying an all-time high, with full-time teams and live television coverage. The standard has improved drastically in the last ten years. Attendances are up, there’s women’s football, youth football, disability football. Irish League clubs are a major part of the community. “So many clubs have spent precious resources on lawyers and architects creating designs so they could secure some of this funding, including Ards Football Club. This is a real kick in the teeth for the local game.” Strangford MLA Peter Weir shared Patton’s dismay. With Assembly elections looming, the DUP politician believes Hargey’s refusal to release football’s funding is a direct response to the Casement Park saga. Plans to redevelop the west Belfast GAA ground into a world-class 34,000 seater stadium has stagnated, following a challenge from Andersonstown residents. On Monday, Hargey stated that the funding for Casement Park will not be affected as it is an “Executive Flagship” project. Weir said: “The announcement by Communities Minister Deirdre Hargey that she is not progressing much needed funding for Sub Regional Stadia is a cynical political exercise, which will deny football clubs the rightful opportunity to improve or build facilities.“The excuse that she cannot approve it because of the lack of Executive approval, simply does not hold water, and is designed to mask her own inaction, a blatant attempt to trade off yet more money for  Casement Park, and an ill-concealed attempt to score political points just ahead of an election.“No where will this be felt more keenly than in Ards, where funding for a new stadium is more justifiably needed than almost anywhere else in Northern Ireland. Ards Football Club is a well led club, with a forward looking vision which all locally can buy into. Critical to that progress is the establishment of a new ground in the town. It is time for Ards FC to come home, and utterly wrong for the Minister to deny them, for the moment, that opportunity. “Contrary to her assertions there should no impediment to this funding being launched. The money was agreed in 2016, and the Minister has had two years to implement this. In both August and then September, Minister Hargey indicated she anticipated to bring this forward very shortly. She has failed to deliver, and now seeks to divert attention from her failure.