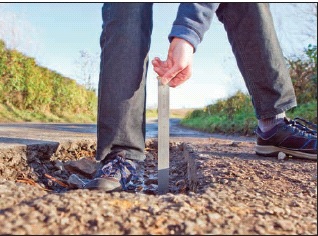 IT’S official – ARDS and North Down has more potholes on its roads than any other area in Northern Ireland.

Recent figures from the Department for Infrastructure states that 483 potholes were reported in the council area by members of the public during January and February. The figures for the other 10 council areas in Northern Ireland show they had fewer reports of potholes leading to calls for increased investment in the borough on roads maintenance.

The figures have also been questioned by two senior politicians who both said they believe the figures of 483 is significantly short of the real number of potholes across the Ards and North Down area. Strangford MLA, Kellie Armstrong, who revealed the figures after a freedom of information request, said she had no doubt the number of potholes in the borough was considerably higher than 483. However, the Department has attempted to play down the figure claiming that until defects are inspected by officials, it will not be known how many reports ‘actually relate to potholes’ as they have found that reports can often be duplicates of the defect.

The figures were revealed through a freedom of information to Strangford MLA, Kellie Armstrong, who said there could easily be another 1,000 potholes on local roads. However she said the figure given did not take into consideration potholes which had been reported which were not listed for repair. “We don’t know what that number is,” she said, adding that while the potholes were regularly inspected and some marked for repair, others were not. “To be honest, 480 potholes across the whole of Ards and North Down, to me, is a very tiny amount. I could nearly count 400 just in the District Electoral Area of Portaferry alone.” Ms Armstrong said she fears the problem is being ‘pushed into another financial year’. “I think the time has come where there needs to be more investment in capital money, than the revenue stuff because they all need properly fixed,” she stated, adding that potholes in rural areas were often neglected.

She also pointed out the dangers potholes pose to all road users, especially in wet months when their true depth can be concealed. Strangford MP Jim Shannon said that was not surprised to discover the borough carried the most reports, adding that he was surprised the figure wasn’t higher. He said he believed that a simple trip down the Ards Peninsula would see 484 potholes recorded alone. Mr Shannon, who regularly reports potholes in the borough said: “The number one thing is that the department needs to be repairing these issues urgently. “It’s not just that these potholes are appearing in the road, causing people to avoid them, but vehicles are getting damaged too. “They have done some good work, they have resurfaced most of the road in Greyabbey, but they still left potholes out in the countryside which they never seem to ever get to.” The DUP MP said although the department had identified and marked some potholes along the peninsula, many sat for over six weeks unrepaired. He continued: “We don’t send them emails about potholes just because we have nothing else to do, we send them because people contact us identifying them as well. They need to be more responsive in a quicker timescale.” Mr Shannon added: “I could be dead sarcastic and say that some of these potholes have been there so long and they are so deep, that the badgers have moved in.” Comparing the large figure to other council areas, Mr Shannon suggested Ards and North Down experienced a large vehicle traffic and that the maintenance of the roads had been neglected for a period of time.

A Department spokeswoman said all reported defects are inspected by officials and will be actioned for repair if they meet the intervention criteria set out in the Department’s current service maintenance policy. “It should be noted that until the completion of the planned inspections, it will not be known how many reports actually relate to potholes as experience has shown that many such reports are often duplicates of the same defect or relate to different issues entirely or indeed may be the responsibility of third parties,” she said. “The Department does not maintain records of potholes reported by the public which have been listed for repair.”