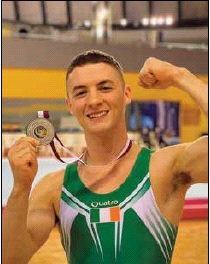 Newtownards gymnast Rhys McClenaghan is set to compete in two further rounds of the FIG Artistic Gymnastics World Cup series, following his silver medal success in Qatar last week. McClenaghan, 22, finished second in Doha’s pommel horse competition with a score of 14.933, just behind Kazakhstan’s Nariman Kurbanov on 15.2. This was McClenaghan’s first competition in five months, and his first time on the podium since 2019. He said: “We decided to downgrade the routine for the final, to make sure I completed a clean routine. The aim is to ensure I build up enough World Cup points to qualify for the World Championships. “I was very happy to have something shiny at the end of it. It’s great to collect another medal. This time it’s a silver, but hopefully next time it’s a gold.” McClenaghan’s Irish teammates Eamon Montgomery and Adam Steele reached the final of the floor competition, finishing sixth and seventh respectively. The trio’s success in Doha means there is a possibility Ireland could qualify for the team event at this year’s World Championships in Liverpool. To improve the chances of qualification, the Irish team will travel to Egypt and Azerbaijan for the final two rounds of the World Cup series. Rhys said: “In Doha, the team did well as a unit with Eamon and Adam also reaching the floor final. There’s now an opportunity for the team to qualify for the World Championships for the first time, so we’ve decided to enter two more rounds of the World Cup. “Next week, we will travel to Cairo in Egypt and then in early April we will compete in Baku, Azerbaijan. It’s a fantastic opportunity for us that I’m really excited to be part of.” McClenaghan travels to Cairo on Tuesday, with the competition set to conclude on Sunday March 20. 2022 promises to be an important year for the former Regent House pupil, who will defend his Commonwealth Games title in Birmingham in August before competing at the World Championships in Liverpool this October.