Rosemount close in on title 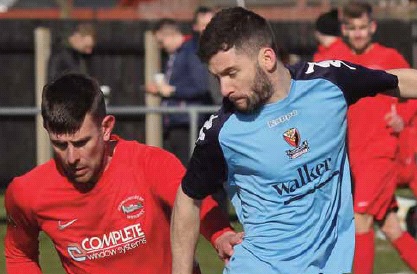 Greyabbey club Rosemount Rec maintained their promotion push with a 5-1 win over Bangor club Bryansburn Rangers on Saturday. Stewart Morrison kicked play off for the visitors with home keeper Chris Rice installed in the goal at the pavilion end of the Islandview Road pitch. It was the team from Ballywooley Park who adopted the first attacking stance, but the effort from Joshua Ferguson was well over the target. In a quick response Ryan Stewart opened some space for Luke Adair through the middle, but keeper Benjamin Fry was down smartly to hold the effort from the home number eight. Unbeaten Rosemount, keen to earn back-to-back promotions, were ahead just three minutes into the affair as Kristopher Jones, under pressure from Stephen Atcheson, headed a Nicky Eccles free-kick over the goal line. The early reverse did not curb Bryansburn’s sense of competitiveness and Chris Rice had to act smartly to palm clear a dipping cross from the left by Jordan Davidson. The home side continued in attacking mode and a well-directed pass from the always-impressive Stephen Atcheson led to Luke Adair forcing the first corner-kick of the afternoon on the quarter-hour. Ryan Stewart, playing a true-captain’s role in the midfield, delivered the pass-ofthe-first-half on 23 minutes to the impressive Nicky Eccles, but his shot was just over the target. The visitors did maintain a forward presence and, when Matthew White curled a left-wing corner kick into the goalmouth it needed a firm header from Neil Melville, Rosemount’s man of the match in their last game with St Luke’s, to affect the clearance. On the half-hour Joshua Ferguson made space for Ross Craig to test Chris Rice but the Rosemount keeper was safe and solid in his response. On 34 minutes the Ards Peninsula side took another step closer to the three points with the imposing advance down the left by Nicky Ennis and the stirring power of Curtis Giltrap supplied the finishing touch. The home side had the look of champions throughout the entire team and, even as referee McCurdy declared the change of ends with Rosemount goal advantage stuck temporarily at 2-0, they had already the shine of winners in their play. When the two met previously at Ballywooley on December 18 Rosemount came away with the points and a 3-2 winning scorecard and it really was difficult, as the second half started, to see how Bryansburn were going to make their return journey this time again with any comfort for their relegation troubles. Three minutes of second half play was all that was needed to cement in this feeling as Reece Ritchie extended the scoreline to 3-0. Five minutes later the drum-beat of certainly was fastened to the thought as Nicky Eccles pushed the advantage to 4- 0. The last time Bryansburn had travelled to the Ards Peninsula they had lost 5-0 at Portaferry, but they did get on the scoresheet with quarter of an hour to play this time when Kristopher Jones headed in from a right wing corner kick. Eight minutes from time Reece Ritchie hit the home side’s fifth however from a Curtis Giltrap flag-kick and Rosemount had gathered in three more points with a blistering display of impressive brilliance.