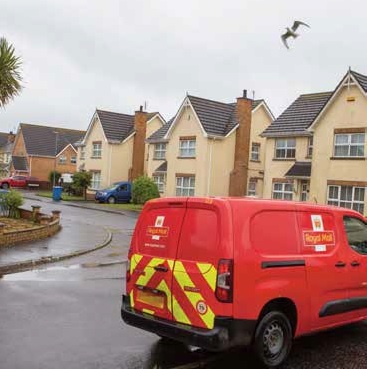 PORTAVOGIE has been compared to the set of a horror movie following vicious attacks by flocks of seagulls who have taken over parts of the village. A postal deliverer was set upon last week and children and pets are particularly vulnerable to the onslaught. The seagulls are a protected species making dealing with the issue more complex as a licence is required to remove them. Gemma McGuicken, who lives at The Tides, says two of her children, 12 yearold Shannon and nine year-old Riley have been the victims of seagull attacks leaving both of them frightened to go out of the house. “There are two or three houses in The Tides where there are nests with baby seagulls and if kids go near these houses seagulls swoop down,” she explained. “They see anyone in the vicinity as a threat – the other night I was bringing shopping in out of the car and they were circling above me.” Quite a few of her neighbours, she continued, were also complaining about the gulls. “It’s terrible the kids can’t go out to play for fear of being attacked by seagulls,” Mrs McGuicken said. Jonny Donnan, who lives in the harbour area, said they were ‘nesting absolutely everywhere’. “They sit on top of your car and set rubbish there, they’re at your front door and at the window. “I love animals but it has got to the point where it is like something out of a horror movie and it is too much,” he said. “They double in number every year and it is getting unbearable – you can’t walk out of your front door without tripping over them.” Councillor Robert Adair said it was ‘becoming very bad’ in Portavogie particularly for residents of The Tides, Lawson Park, Lemons Road and Seahaven. “Portavogie is a fishing village and you expect to have seagulls, but it has become a problem for a lot of people especially when the birds nest in roofs and have young ones,” he continued. “We find the birds start to swoop and it is particularly dangerous for elderly residents or those with children or pets.” A number of residents, Mr Adair said, were very afraid for their safety. “Last week the local postman ended up in the accident and emergency department at hospital after his head was very badly injured during an attack,” he revealed. “When it gets to this stage something has to be done.” The problem, Mr Adair explained, escalated after Green Isle off the coast of Portavogie was damaged by fire several years ago destroying the birds nesting habitat. Ards and North Down Council has offered to remove beehives when they become dangerous and this is on the same level, according to Mr Adair: “I have asked the council to work with the Department of Agriculture, Environment and Rural Affairs to help people secure their properties when gulls are nesting there. “It is about striking a balance of being kind to the seagulls but ensuring they are not a health and safety risk to residents.” A council spokeswoman said they were aware residents could occasionally experience problems because of the presence and behaviour of gulls in built up areas. “In the majority of cases this will involve lesser black-backed gulls and herring gulls which can become particularly aggressive during their nesting season and when rearing young,” she continued. “Council would recommend that people refrain from feeding gulls and consider taking action to prevent the birds nesting on their property by fitting chinmey cowls and other protective measures.” All species of gull are protected under the Wildlife (Northern Ireland) Order 1985 they advised which made it illegal to intentionally or recklessly injure or kill any gull or damage of destroy an active nest or its contents, It is also illegal, the spokeswoman added, to prevent birds from accessing their nest and to disturb any nesting bird. “Council would advise anyone experiencing aggressive gull behaviour at their property to seek advice from Wildlife Licensing at the Department of Rural Affairs to determine what steps can be taken to remove or control the birds,” the council spokeswoman concluded. A Royal Mail spokeswoman said they were aware of reports of problems with seagulls in parts of Portavogie. “We are monitoring the situation, and deliveries have been continuing as normal,” she said. “The safety of our colleagues is our highest priority.”