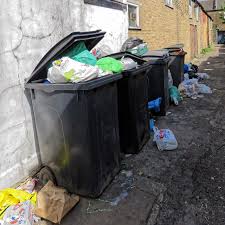 BIN collections look set to be cancelled for a full fortnight at the start of next month. That’s the likely outcome of another round of strikes from local council staff who are members of the public services union Unite.

Ards and North Down Council workers plan more industrial action in an ongoing pay dispute, repeating pickets that last month saw bin collections across the borough called off for an entire week.

This time, however, Unite says its council employees will head out from May 3 through May 15; combined with the May 2 bank holiday, that means bin collections will likely be cancelled for a full fortnight – twice as long as last month’s strike. The council said a meeting will take place with the Union representatives on Friday and that it will detail any changes to council services at a later date. In March, however, the council not only called off all household bin collections but also shut down Household Recycling Centres (HRCs) in Bangor and Holywood for the duration of the industrial action, and closed an HRC in Kircubbin for four out of the five strike days. That meant what is by far the borough’s busiest HRC, Bangor’s, locked its doors the entire time workers were on strike – though the council kept several facilities in the Ards and Ards peninsula regions running as normal. Last month the council kept bin collections from local businesses running. At the time of going to press, it wasn’t clear whether the same will happen for the strike fortnight in May.

The industrial action is happening due to an ongoing pay dispute between workers and public sector employers. Staff were offered a 1.75% wage rise after several years of salary freezes; coming in the middle of a cost of living crisis and spiralling inflation, Unite branded the result an insult and were instead looking for a 10% increase. According to union officials, employers across the public sector have made little to no effort to negotiate since the last round of industrial action, meaning more strikes are on the horizon. Senior officials in public bodies, including Ards and North Down Council, have insisted that they don’t have the ability to negotiate with their staff, as pay rises are set nationally. However, striking council workers last month maintained that the council could improve the picture by boosting pay scale points or bringing in better terms and conditions, among other ideas.

Speaking this week, councillor Barry McKee – leader of the Green Party faction on Ards and North Down Council – expressed his solidarity with striking workers, and called on public sector employers to get round the negotiating table to hammer out a solution. “The Green Party NI stands in solidarity with Unite members in Ards and North Down and across the country,” he said. “In the midst of a cost of living crisis, it is vital that all workers are paid fairly for their labour, and it is disappointing that workers have been forced to take strike action as a last resort to defend their rights. “As Greens, we will always stand with workers and support them in industrial action. We urge the employers to come to the table, and negotiate an outcome agreed to by all unions