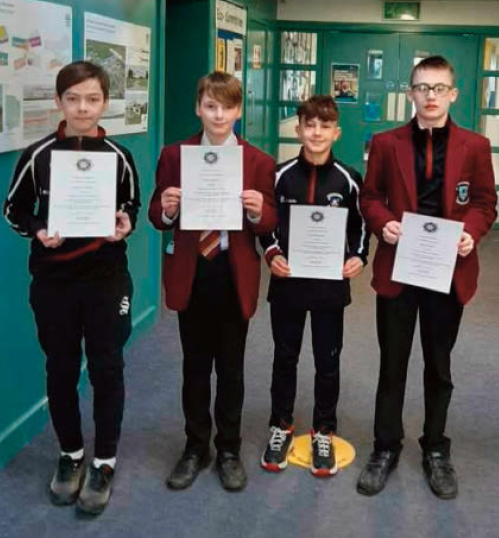 FOUR Strangford Integrated College pupils
have won high praise for their community
spirit after they came to the aid of a
vulnerable person.
Ards Peninsula Neighbourhood officers were privileged to
present certificates of recognition to students Taylor Agnew,
Carter Matchett, Blake Hunter and Thom Hodgson.
Recalling the efforts of these community spirited youngsters,
a police spokesperson said: “A vulnerable member of the
public became trapped in the tennis courts at Londonderry
Park, Newtownards on Saturday, September 25.
“The male became very distressed and agitated. The young
people contacted emergency services and family members
remained with the vulnerable male providing him with
reassurance and support until he could be assisted from the
area and left safe and well with family members.
“All too often our young people receive a lot of negative
publicity within the community. We firmly believe that
positive actions such as those demonstrated by the young
men should be recognised and encouraged. Well done young
men.”
Mrs Clare Foster, principal of Strangford Integrated College,
was delighted to congratulate the boys on receiving their
certificates of recognition.
She said: “We are so proud of these Year 9 students and
delighted that they have received the recognition they
deserve from the Ards Peninsula Neighbourhood Police
Officers.
“Our students at Strangford Integrated College are taught in
an atmosphere of respect and understanding which we
believe will give them a firm foundation for their future lives.
“These boys have shown kindness and empathy to someone
that was in need and we commend their positive and
thoughtful actions. Well done boys. You are fantastic
ambassadors for our school and community.”