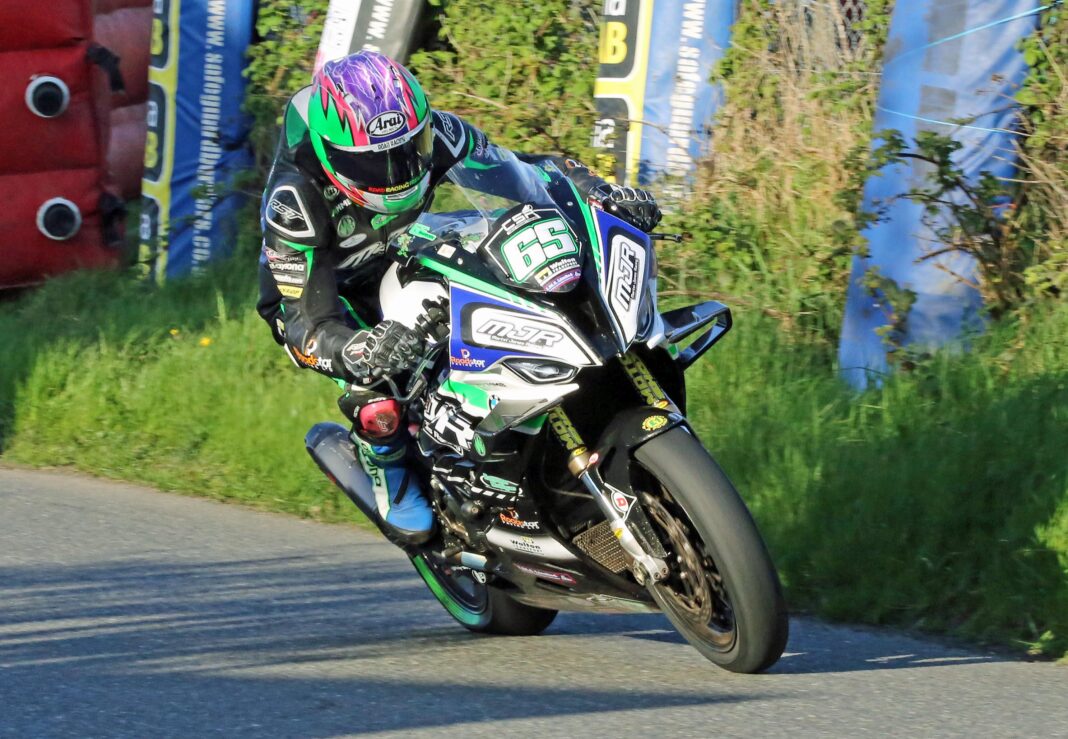 The opening Superbike race saw red flags displayed when three riders came together in a crash just after the first corner on the opening lap, two of the riders were treated on the spot and transported to hospital.

On the six lap restart Michael Sweeney hit the front on the MJR. BMW from Adam McLean, Thomas Maxwell, Richard Charlton, Dominic Herbertson and James Chake. By mid-distance Sweeney had increased his lead over McLean to over two seconds. Chake dropped out of sixth place, to be replaced by Graham Kennedy. These positions remained the same to the finish with Sweeney winning by three and a half seconds.

The second Superbike race for the Cookstown 100 was also red flagged when McLean crashed out on lap six while disputing the lead with Sweeney, with time running out the organisers decided on a five lap restart, with McLean a non-starter Sweeney took the lead chased by Maxwell, Herbertson, Charleton, Kennedy and Sam Johnston. On lap two the only change was Herbertson dropping down to eighth after an overshoot at Gortin Corner, but he fought back to sixth. At the finish Sweeney won from Maxwell, Charleton, Kennedy with Herbertson up another place on the final lap to snatch fifth from Johnston.

In the 600cc race McLean took the McAdoo Kawasaki into the lead on lap one from Mike Browne, Sweeney moved up to third followed by Jordan Kennedy and Herbertson. Next lap, Jordan passed Sweeney into third and Herbertson got past Kennedy for fifth. The positions remained the same to the end of lap five when this race was red flagged when Tommy Henry crashed out. McLean won by over six seconds.

The Supertwins was also red flagged when McLean crashed while up front, when the race restarted over five laps McLean was a non-starter leaving Sweeney to sweep to the front, followed by Herbertson who could not match the pace of the leader but he managed to keep Welsh visitor Paul Williams at bay to finish second, Eoin O’Sochre finished fourth and Michael Gillan just held off Stephen McKnight for fifth.

In the Lightweight Supersport/250cc combined races Scottish rider Kris Duncan romped home well clear after the nine laps, but behind him things were very close for the remaining leader board positions. David Howard who was fourth on lap two moved up to second after Williams retired. Comber’s Alan Johnston had a great ride to snatch third on the last lap from Dan Ingham by less than half a second, the 250 men came next with Germany’s Chris Myer just beating Gareth Arnold for fifth.

The Junior Support race was won by Eoin O’Sochreby by three seconds from Michael Gillanand Ingham. RJ Woolsey just held off Myer to win the B race with Dave Walsh third.

Senior Support A race gave Jack Oliver his first road race victory he was pushed all the way by Keelim Ryan finishing just 0.241 of a second behind the winner, Michael Gahan moved through the field from 11th on the opening lap to finish third recording the fastest lap.

The B Open race saw Paul Gartland at the front early on but he was overhauled by Darryl Anderson and Michael Dokopul from group B and slipped to third place at the finish.

The Cookstown 100 B race was won by Toby Shann with Matthew Reese second and Anderson third.

Moto3 was an easy win for Mike Browne from O’Siochru and Nigel Moore. The combined 300cc race went to Barry Davidson from teammate Darryl Tweed and Steve Moody.

Next Saturday the action moves to Tandragee with the 60th Anniversary Tandragee 100 races. Roads close on Friday for practice at 2pm and open for 9pm. Roads close Saturday for races from 9.30am to 7pm.