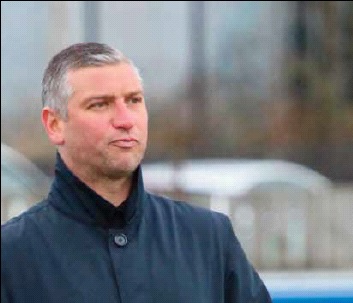 Ards  manager Matthew Tipton has demonstrated that he is not afraid to leave out the club’s big name players. Last Saturday, Tipton dropped central defenders Jaimie McGovern and James Ferrin from the starting line-up for the game with Ballyclare Comrades. It’s the first time club captain McGovern – who won Premiership titles with both Glentoran and Cliftonville – has not been picked, when available for selection, since he joined Ards in 2019. Following the 5-0 victory, Tipton said: “Is it a big call? I suppose, from the outside looking in people might think dropping the captain of the club is a big call. “But we’ve won just one game in ten, and we’ve conceded two goals in nearly every game. So, I don’t think it was a big decision to change the defence. “If it is a big decision, well it’s my job to make big decisions. And I think those decisions were justified as not only did we win 5-0, but we also kept a clean sheet for the first time since October. “As a team, we looked collectively better. However, the defence still has Bam Neeson to thank for that clean sheet as he made two or three good saves. “At the end of the day, I’m not sure any Ards player can complain if they are dropped, considering the results in recent months.” At the other end of the field, Ards played some attractive football. While two-goal hero David McAllister took the plaudits, Tipton was keen to highlight the first half performance of defensive midfielder Conall McGrandles. He said: “We scored five goals and we created numerous chances. Dee Dee McAllister was superb, Dan Reynolds looked sharp and Ross Arthurs held the ball up well. On top of that, you had Paddy Cafolla and Gary Donnelly getting forward from midfield, and even the two full-backs got forward. “The platform for that was set by Conall McGrandles, as he sits there and helps the back two. That allows the full-backs and the midfielders get forward. Conall’s discipline in the middle of pitch was a big part of our success in the first half. “Unfortunately, we had to take him off at half-time due to a knock. “In the second half, we tired a little. That’s understandable because the players are not 100% drilled into the way I want to play. They’re a fit group of lads, but they’re not quite fit enough to play with the intensity I want to play with, for a full 90 minutes. “But we will get there. Saturday showed there’s something to work with.” A victory at the Newry Showgrounds on Saturday would go a long way to helping Ards secure a top six spot, ahead of this month’s split. However, promotion favourites Newry are unbeaten in the last six head-to-head clashes between the two clubs. Last month, they beat Ards 1-0 in the second round of the Irish Cup. Despite that record, exPortadown manager Tipton expects Ards to play on the front foot. “Newry are a good team. Darren Mullen has done a superb job there and I’ve enjoyed a few battles with him in recent years. Saturday will be another battle. “A month ago, we went there and lost 1-0 so we’re not that far away from them. But we’re not going to Newry on Saturday to defend. I believe we can go there and express ourselves. I want to see more performances like that one against Ballyclare.” Although McGrandles was substituted at half-time due to injury, he’s expected to available for Saturday’s trip to Newry. Midfielder TJ Murray and striker Joe Tully also hope to play some part in the game. Both men were unused substitutes for last weekend’s 5-0 win over Ballyclare, although both remain short of full fitness. TRAVEL NEWS The Premier Ards Supporters’ Club bus will leave the Ards FC Sports Club at 1.30pm. Ards fans will be housed on the away side of the ground.